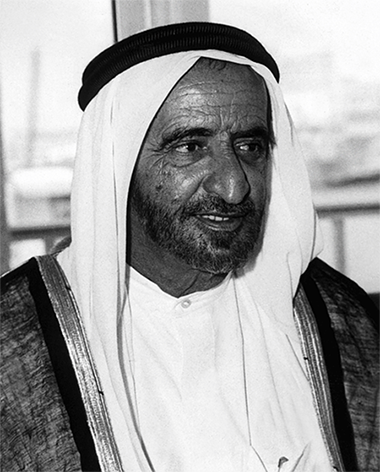 The Al Maktoum family is the ruling family of Dubai, and one of six ruling families of the United Arab Emirates. It has a long and illustrious history of serving the region since it began its reign as rulers of Dubai in 1833. Dubai is now one of the most vibrant cities in the world, attracting tourists and business executives from many countries.

Sheikh Rashid was responsible for the transformation of Dubai from a small cluster of settlements near the Dubai Creek to a modern port city and commercial hub. His famous line, “My grandfather rode a camel, my father rode a camel, I drive a Mercedes, my son drives a Land Rover, his son will drive a Land Rover, but his son will ride a camel”,reflected his concern that Dubai’s oil, which was discovered in 1966 and which began production in 1969, would run out within a few generations. He therefore worked to develop the economy of Dubai so that it could survive after the end of oil production, and was a driving force behind a number of major infrastructure projects to promote Dubai as a regional hub for trade:

Relationship With Other Emirates

Dubai remained in a stand-off with Abu Dhabi at the time Sheikh Rashid became Ruler of Dubai following the armed border dispute between the two emirates in 1946, and he established a close relationship with Qatar. Sheikh Rashid’s daughter married the Emir of Qatar in 1961. In 1966, India devalued the rupee, and Qatar and Dubai adopted the Gulf rupee as a common currency, whilst Abu Dhabi adopted the Bahraini dinar.

The Emir of Kuwait assisted in the financing of the Dredging of the Creek, along with a popular issue of bonds, the ‘creek bonds’ and revenue derived from land reclamation made possible by the dredging.[4] The project resulted in Dubai’s rising prominence as an entrepôt, a position cemented by the visionary construction of a 15-berth deep water port, Port Rashid, starting in 1969.

Sheikh Rashid brought Dubai to join Abu Dhabi and other northern Emirates to create the United Arab Emirates in 1971, and in 1973, Dubai joined the other emirates to adopt a uniform currency, the UAE dirham.

Jebel Ali port was established in 1979, and the customs free zone Jebel Ali Free Zone (JAFZ) was built around the port in 1985. By the late 1990s JAFZ developed into a commercial free zone.